Under Pressure: Mothering in The Age of Perfection

There are more than a few reasons I am happy I waited until my mid-30’s to have a baby (and a few reasons I am not, but that’s for another post), and when I did give birth at 37 and decided to hit some of the mom-and-baby library groups, it became abundantly clear what exactly had made waiting right for me.

Being a people watcher and an armchair psychologist, I had a good look around. The moms were all younger than me; I wasn’t the oldest, thankfully, due to the grandmother unsuccessfully wrangling her grandchildren to the circle and the elderly librarian trying to grab their attention.

Walmart May Have just Ended the Mommy Wars 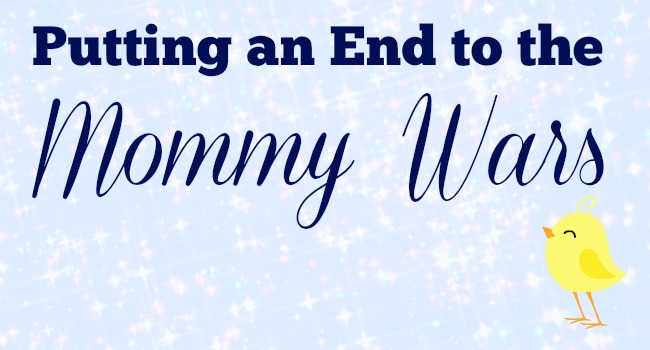 It’s hard to classify anyone as ‘Mom of the Year’. What criteria does one use? While women sling insults at each other in the name of the mommy wars, we seem to be forgetting about walking a mile in someone else’s shoes.

Choosing the ‘best’ is too hard. Do we award it to a mom overcoming a huge challenge? But one person’s hurdle could be a breeze for another woman. Do we give it to the mom who makes the best school lunches even though she has a staff bigger than Martha Stewart’s? Maybe we reward a mom forced to leave her family to work away from home so she can send money to her children. Or a woman who is hurting but rejoices in the face of negativity. A hard choice? We think so. Well, we have good news. Walmart may have just ended the mommy wars. Walmart’s Mom of the Year Award is now recognizing multiple people! Seeing that moms can thrive in many different areas, Walmart has designated categories:

Anyone else welling up with tears just thinking about who you can nominate? Know what’s even better? A Mom doesn’t have to win to feel appreciated. Every Mom of the Year nominee gets a profile page that can be shared with her friends and family. Loved ones can write messages and tributes on her page to ensure she never forgets what a great job she’s doing. Of course the nominees will print and laminate my comments to post on the fridge.. the bathroom mirror.. the car dashboard… the temper tantrum-ing toddler’s forehead…).

Many moms work like dogs for little appreciation. Why not give the biggest honour of all to a mom you know? Show her she’s doing a great job. Voting begins June 11th – let the heartwarming stories, tears and giggles begin! Moms are worth it.

Yes. I am Mom Enough, thanks Time Magazine

What a year it’s been for parenting to be in the spotlight.  With What to Expect When You’re Expecting about to debut, the ‘Mommy Wars‘ surrounding Hilary Rosen’s comments about Ann Romney being a SAHM, and now Time Magazine’s provocative cover.  For me, it’s not the image but the headline.  The article inside is pretty tame – facts and ideas about attachment parenting that surfaced 20 years ago and have always caused judgement and quibbles in the nicest of mommy groups.

“Are you mom enough?”  Seriously?  Time Magazine should be ashamed.  There are gimmicks to get people in grocery store lines to snag a magazine but this headline is in seriously poor taste.  As if Moms aren’t hard enough on themselves.  The reason I run UrbanMommies and UrbanDaddies is that when I had young kids I felt isolated, judged and condescended.  I was so immersed in the ‘shoulds’ of attachment parenting that I neglected the needs of myself as a woman and human being.  I am thrilled that more parents are nursing and wearing their babies.  But mothers and fathers are also losing sight of their own needs.  Dr. Sears is a brilliant physician with great ideas, but like with all ‘religions’, if taken to the extreme or used out of context, chaos ensues.

Both of my kids had colic for 18 months.  (I’m hoping the brain-synapse theory of colic is true and it just means they are smart).  They were high needs babies.  I wore them both in a sling or carrier hours every day.  The massage bills added up.  And I didn’t shower much.  The boys wouldn’t go in a stroller without screaming so I just sacrificed my body and hoped that the skeleton would hold out.  They slept in my bed for a few weeks and they snacked on breast milk whenever they were inclined.  I was exhausted, drained, burnt out and my milk supply dwindled due to lack of self-care.

So I read all of the books about ‘gentle’ ways to train them to sleep.  (This is where you hear people start growling as we get into the Pantley vs. Ferber debate.)  In a nutshell, I tried all of the gentle stuff.  For weeks.  I was still exhausted.  They wouldn’t settle.  The guilt was overwhelming and everyone weighed in.  Nurses, paediatricians, friends, helplines, and my elders.  So now I was exhausted and demoralized, questioning my parenting and values.  As soon as I shut out the ‘advisors’, I had an epiphany.  I decided I needed to care for myself, my marriage, my health.  Follow my instincts.  I knew my baby and my family.  The others didn’t carry a kid in their belly and have a head emerge from their ‘Lady Garden’ (quoting the Bloggess on CNN – brilliant).  I was no good to my kids if I was an exhausted and irritated mess.

So I let them cry a bit.  Yes, a ‘modified’ Ferber approach.  I put them in a crib.  I took off whatever stinky t-shirt I was wearing and tucked it into their hands, hoping my smell would calm them and vindicate me.  I went back often, leaving them a bit longer each time.  They were stubborn but after a time, they both learned to sleep.  Some mom friends stopped talking to me.  I was the devil.  But my milk supply returned.  The colour came back to my cheeks.  I still carried them in a sling all the time.  I nursed until they were 18 months (and I was at my thinnest – why the hell did I stop?!) and I still carry and cuddle them.  They are very attached and loving.

So I used my instincts as a parent to do what was best for my family and kids.  I stopped listening to the know-it-all Moms who were trying to justify their own decisions by criticizing mine.  And I developed enough confidence and belief in my intuition to pour my heart and soul into a company that would hopefully help other moms to trust their own decisions and take time to care for themselves.  So yes, Time Magazine.  I am Mom enough, and I would argue that all Moms, whatever their decisions on breast/bottle, sleep training, baby wearing or whether they stay at home or work outside are all Mom enough.  We are all doing the best we can.  As we shared yesterday through Facebook, “There is no way to be a perfect mother and a million ways to be a good one”.