The Day I Gave Bob an Uppercut

Knee. Kick. Jab. Feel empowered? I sure did. Founded in 2004, the 30 Minute Hit is a series of women-only boxing gyms across Canada that are now expanding into the US. Unlike other sweaty, male-centric, dingy back-alley gyms, Jackson and Deanna Loychuk created a female-friendly and time efficient circuit system where women can fit in a workout with kids in tow. The child and baby-safe area in each gym is in full view of the moms who are setting a great example for heir little ones, and women can visit on their own terms, without having to feel guilty for being late for a ‘class’. This is like female nirvana – without the chocolate.

After signing in on the electronic board, you warm up by skipping. (If you remembered to do your kegels while pregnant.) Not only had I been lazy in that regard but I hadn’t skipped since the pink ribbons came off of my pigtails. Not to worry. The friendly environment and trainer helped get me warmed up in ways that suited my needs. Like in a traditional boxing ring, there’s a bell. I felt hard core – except for the gorgeous pink boxing gloves. At every ding of the bell I graduated to the next station, alternating between arms, legs and core strength.

It felt very strange at first. I realized I had never actually hit anything. Like, never. When my kids were toddlers and were ‘experimenting’ with hitting, I instructed them to hit a pillow or use art to express their anger. How hypocritical of me. I should have hit a pillow too instead of bottling my emotions inside. Example is everything.

During my workout I kneed and hit very clean bags and the emotions flooded through. Was I guilty? Empowered? Angry? Hopefully you will be less analytical during the experience! My mind rarely relaxes. As some of you are aware, about 15 years ago I was sexually assaulted. It happened in the middle of the night by a stranger who broke into my home and I was unable to fight back. While I took basic self-defense courses afterwards, I still had never actually hit anything. Shocking, really. As I did my ‘workout’ sweat bubbles from the enhance fitness, but I was also releasing emotions and memories from long ago. These negative emotions were being replaced with power, strength and even forgiveness.

As I went through the circuit, not only were my muscles getting stronger, but my confidence and self-esteem were improving in ways far beyond the tightening of muscles or slimming of the waistline. The end of the circuit involved ‘Bob’, a foam torso and head (who is actually quite ripped despite being attached to a pole). I was able to do anything I wanted to him using the boxing techniques I had learned. Sure I felt sorry for the guy at first, but I also felt fit, strong and resilient. And I was in and out in 30 minutes. I’ll be back, Bob. And sorry for that wicked uppercut. 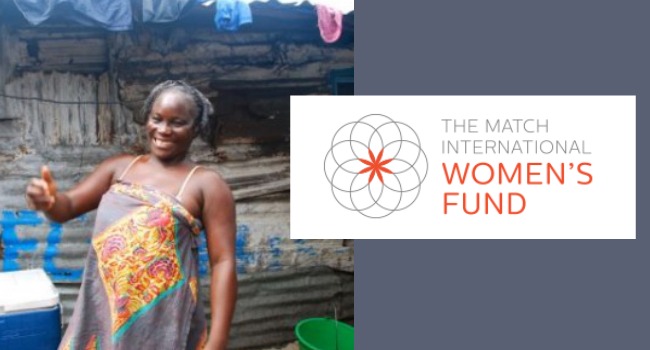 MATCH International is a grant-making agency that raises Canadian dollars (non-government) that are put directly in the hands of the communities who are fighting against female injustice.  Is invests in social innovation by providing agency of change to those who need it most. MATCH believes that the ability for social change comes from within the community itself.  They believe that it is the people who live within these communities who are most capable of identifying what needs to be changed in order to create gender equality, and creative ways to do it. So to them, and to me, it makes sense that they directly support the people and the projects that are most affected by the struggle.

For example, in Malawi, young women were missing 3-5 school days a month when menstruating until MATCH funded a local program that allowed mothers to develop and produce locally-sourced cotton pads which were provided free to the students and sold within the community.  This project provided a source of income for the mothers and markedly reduced the numbers of school days the young women were absent.  On a larger scale, two years ago MATCH provided seed funding to the African Women’s Development Fund (AWDF) to foster programs working for social justice, equity and peace; today the AWDF supports 90 projects in 29 African countries.

I had the honour of speaking with Jess Tomlin today, the Executive Director of MATCH International Women’s Fund.  Jess was in Toronto this week promoting their newest grantee partner and project:  Boxgirls Kenya. This organization provides sport, leadership, and mentoring to over 800 Kenyan girls.  It gives the girls a feeling of empowerment.  It encourages them, their families, and the entire community to challenge the common perception of what girls can do, to see the world in a new light, and it allows them to think about how else their lives can be. This program yielded the first woman in Kenya to represent boxing for the Olympics games in 2012. This is the foundation of change that MATCH whole-heartedly strives to support.

Companies like MATCH and stories like these are the ones that inspire me to believe that we can change the world, that we can do more than just survive but thrive in bad situations.  However, for every project that MATCH was able to fund this year, 80 projects had to be turned down due to lack of funding.  MATCH was able to provide for 15 of the 1200 recent round of applications.  That leaves hundreds of communities who have created goal-directed projects still in desperate need.  Today I learned that of the money that Canadians spend on charity only 8% goes toward international causes: of that 8%, ½-¾ of this money is in response to a natural disaster – leaving 2% of Canadian donations going to all other international causes.

Jess Tomlin goes back to Ottawa today, in time to participate in the International Women’s Day on Saturday March 8th.  This venue provides an opportunity to raise awareness and increase donations to MATCH so that this organization can continue to grow and advance the rights and equality of women around the globe by providing agency of change to those who need it the most.