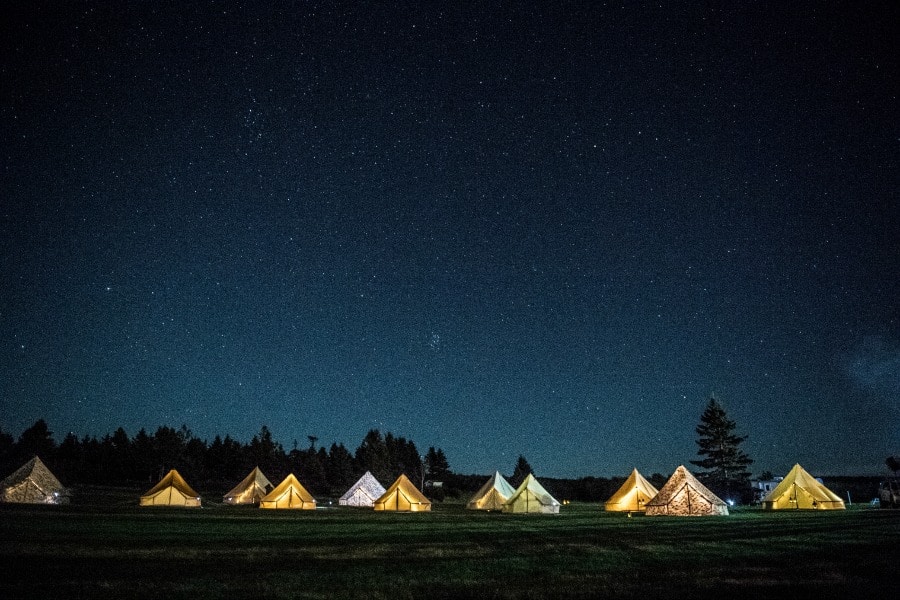 Exploring the East Coast in a 2018 Traverse

The more I see of my birthplace, I wish I had explored extensively and heard tons more stories from locals as I grew up. I am feeling abundantly thankful for Chevrolet Canada for inviting me to drive the amazing Traverse around the Bay of Fundy. Youth may be wasted on the young, but travel at any age is never a waste. Even in your own backyard. I vow to take as many road trips and holidays as I possibly can with my family in order to broaden our minds and strengthen our bonds. The kids will have to do the trek through New Brunswick and Nova Scotia with me in the future, because there is nothing like the Maritimes. Sociable!

Beginning in Sackville, New Brunswick, I delighted in having lunch at Cranewood on Main. The stunning building was once the home of the president of Mount Allison University and I felt like I was finally at home in my birthplace. Big rooms filled with antiques and cut-up gourmet sandwiches with upscale ingredients and even tiny backed onion bread squares to pop into the soup made me feel like the east coast had grown up since I was a little girl. It certainly has retained its charm, and I hope that my earthy roots still show. Thankfully the requisite plate of squares and cakes finished the meal. I smiled remembering how my grandparents wouldn’t let our household get away with serving fewer than three types of squares. 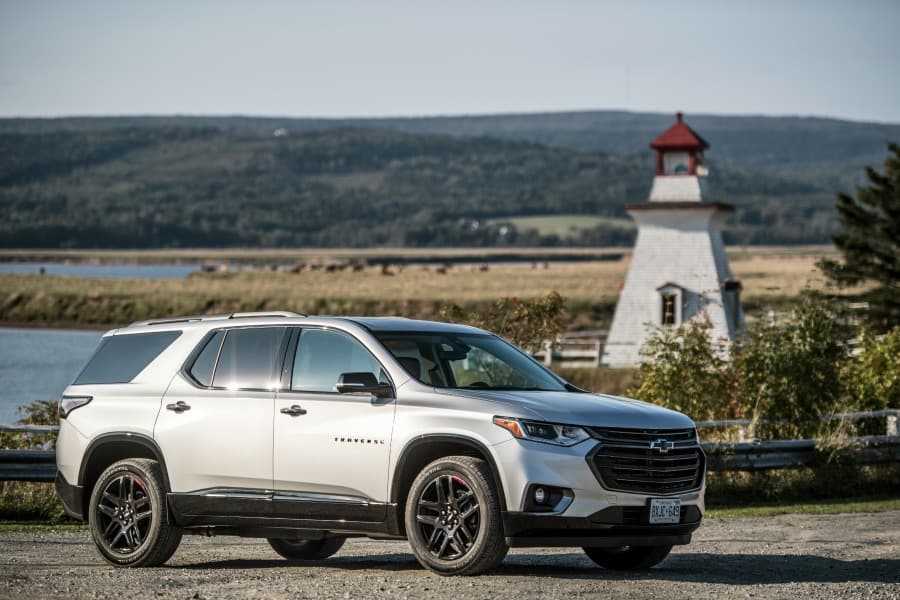 Learning about the vehicles we were to test was as exciting as always. I love seeing the new innovations, and Chevrolet keeps packing more and more into their SUVs. I was introduced to teen driver while testing the Malibu, and the kick gate functionality while driving the Equinox. This time around I wanted to fully explore the 2018 Traverse. You will see all of the features in my video, but a few ones that I was most excited about included a rearview camera seen in the rearview mirror with the flick of a switch, and a lockable charging compartment on the front console. 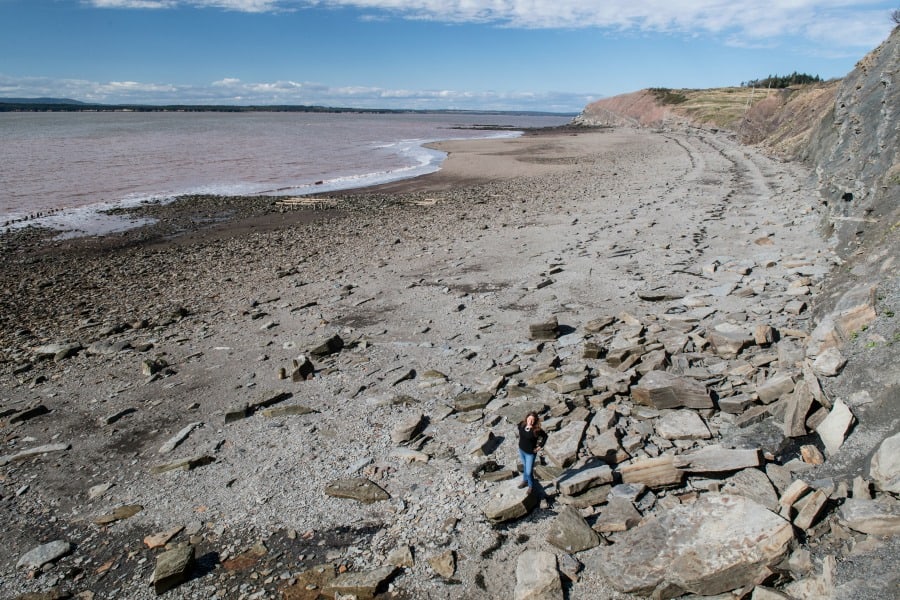 The Fossils of Joggins

Our second stop was Joggins, Nova Scotia. How could I never have been there? The historic Fossil Cliffs have been named a Unesco Heritage Site, and for good reason. Located on the Bay of Fundy – home to the world’s highest tides, erosion has revealed fossils on the beach from the “Coal Age,” 100 million years before the dinosaurs. My kids would not have left this beach for hours or days. 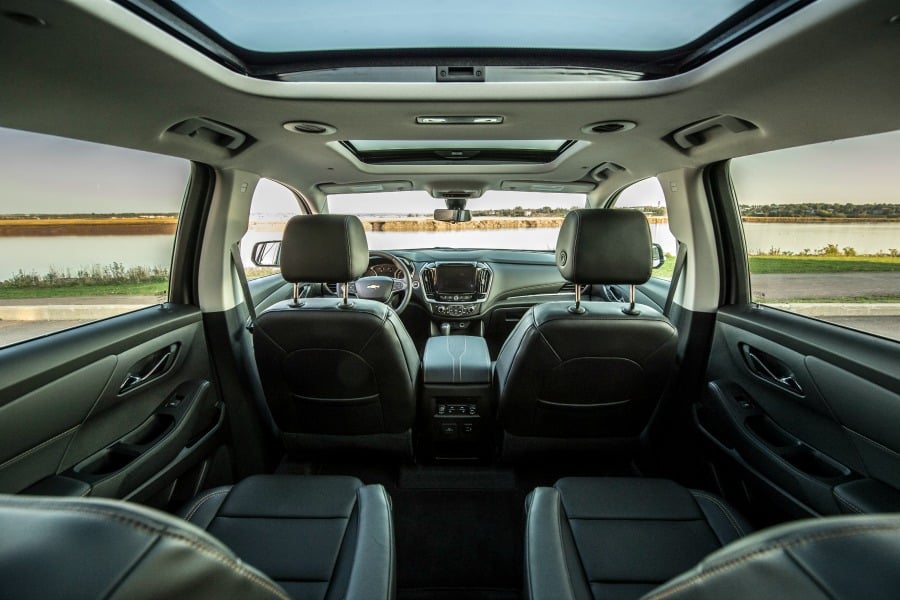 It was disappointing as I drove two hours to Advocate Harbour that I didn’t stumble upon any moose. I did, however, get to fully test the suspension and handling of the vehicle on the windy road along the north side of the Bay of Fundy. I was able to gaze upwards through the expansive sunroofs at the tall deciduous trees as they began to display their stunning autumn colour. Chevrolet may have to invent a safety feature to prevent you from doing that because the huge sunroof makes it far too tempting as the leaves turn orange and crimson. The Glooscap Trail surrounds the Minas Basin shores. Mi’kmaq legends tell of the mighty Glooscap who created Five Islands and controlled the great tides with his magic. 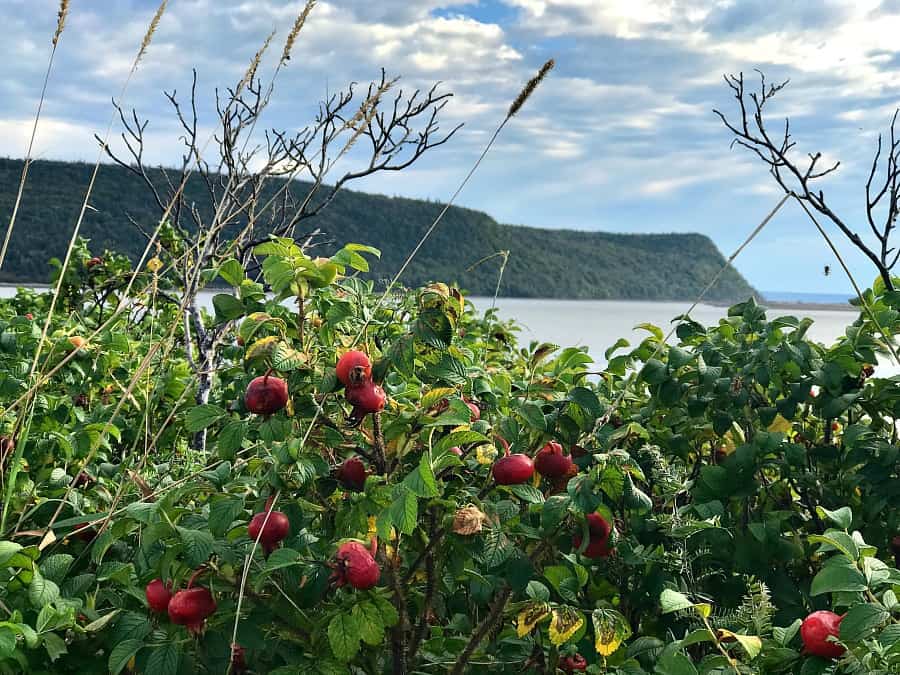 Snaking along the coastal road into Advocate Harbour revealed the first glimpse of Cape Split. Rosehips lined the streets and I thought of my relatives who would have been gearing up to harvest the precious fruit for canning. What a spectacular country we have. 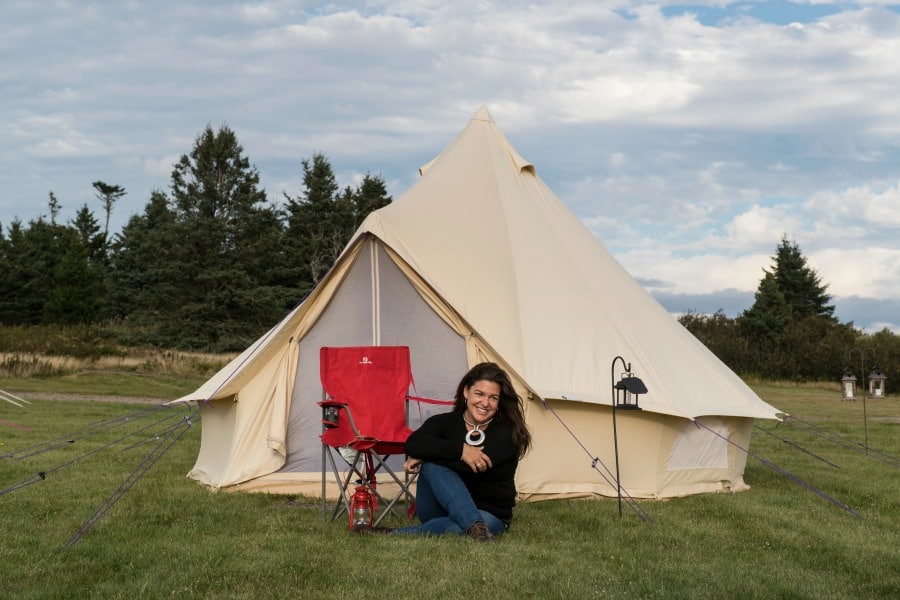 Entering the enormous glamping field, I was giddy. Huge tents were scattered over perfect grass, and local hors-d’oeuvres, wines and beers were offered on silver trays and traditional Nova Scotia depression glass goblets. 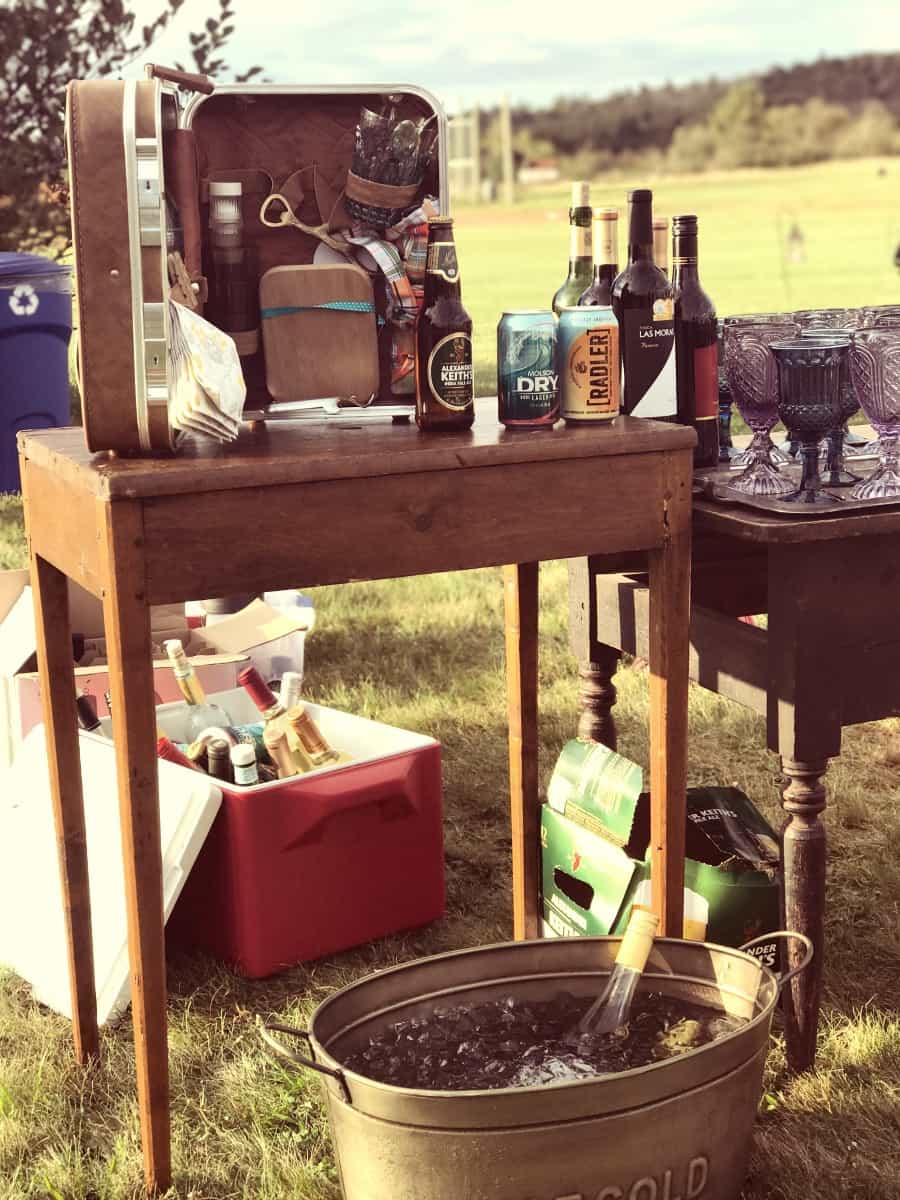 Buckets of ice, local Dutchman Cheese Farm spreads and strings of modern yet rustic bulbs decorated the dining table. Tents, yet with beds. Camping, yet with silver. The first of many juxtopositions I would discover. East Coast Glamping had arranged a cot, chair, fairy lights, slippers and even a bedside table in each tent. 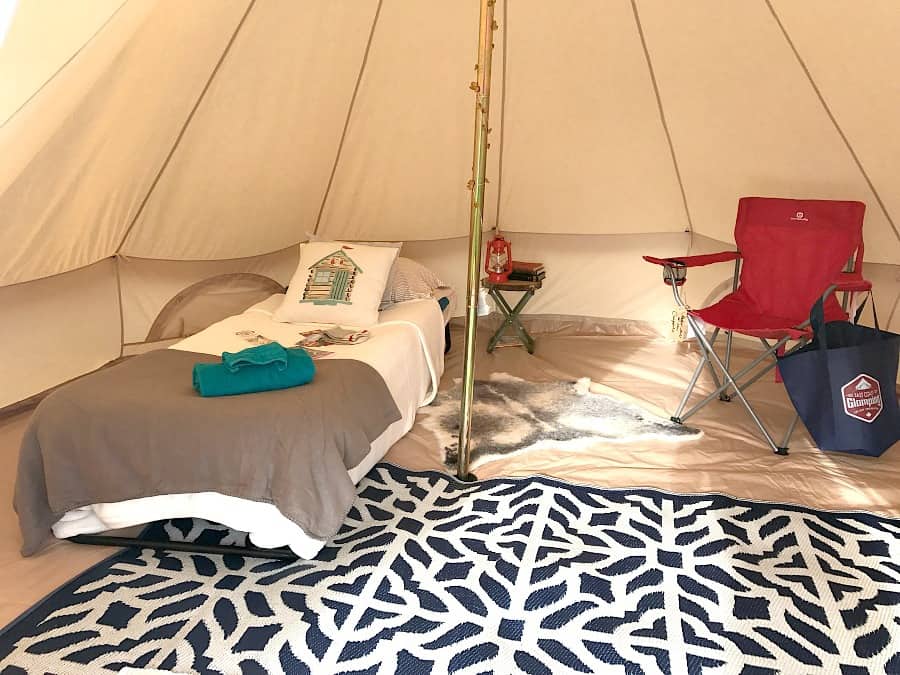 A larger hospitality tent included a fireplace, sofas, books, binoculars and blankets. The wifi in this part of Nova Scotia was spotty, which offered a perfect and probably unplanned opportunity to test the strength of the OnStar 4G LTE Wi-Fi in the vehicles. (It was excellent.) I remember being near here as a child and walking a few miles in order to find a payphone. The beauty around us may remain the same, but technology has come so far! Incredible. 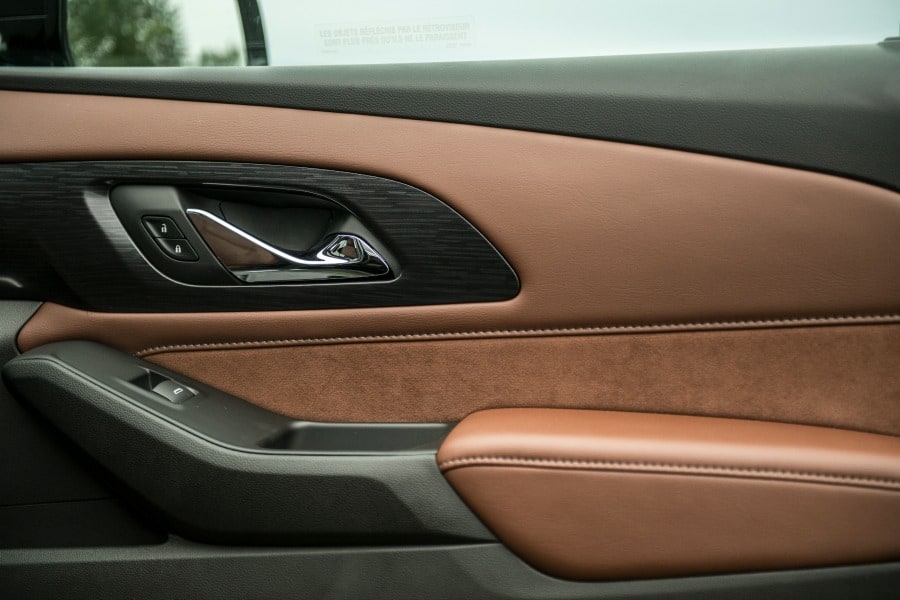 Just before sunset, we were driven to the spectacular Cap D’Or lighthouse. I was able to truly appreciate the legroom in the back seat of the Traverse thanks to the flat floor, and the vehicle hilariously triggered Apple Carplay as I charged my phone and forced people to listen to the Frozen soundtrack as I sang! The luxurious leather and stitching on the High Country model made me feel more like I could be in Manhattan or on Windsor Castle grounds as easily as watching for moose on the Glooscap Trail.

After far too many sunset selfies and jaw-droppingly stunning views, the lobster was served. This lighthouse offers a restaurant as well as accommodation during summers, and I would find out the next day that our charismatic and competent host Darcy Snell also charters his boat to explore the geological marvels of the Bay of Fundy. 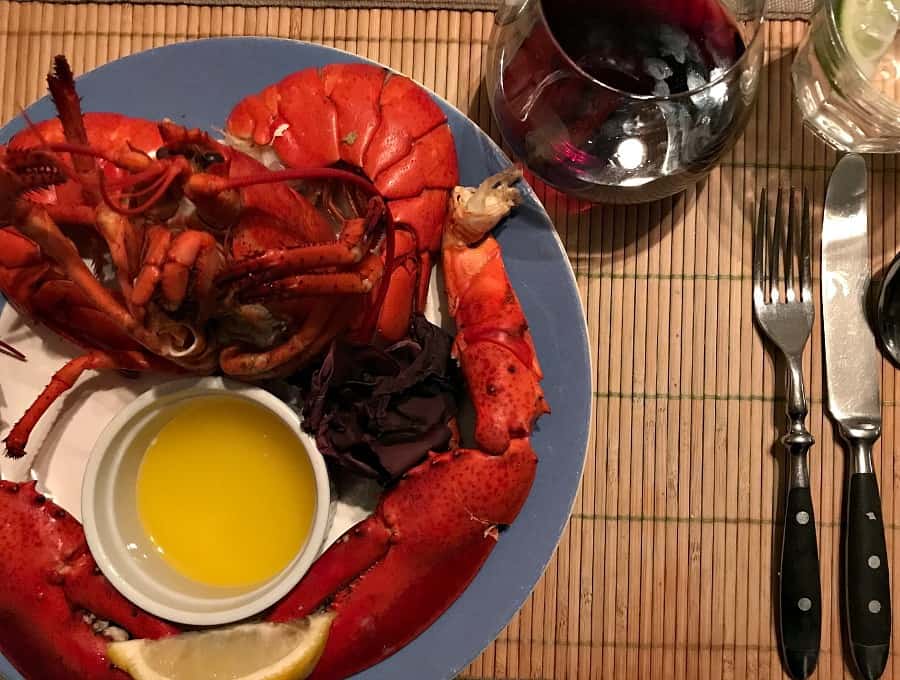 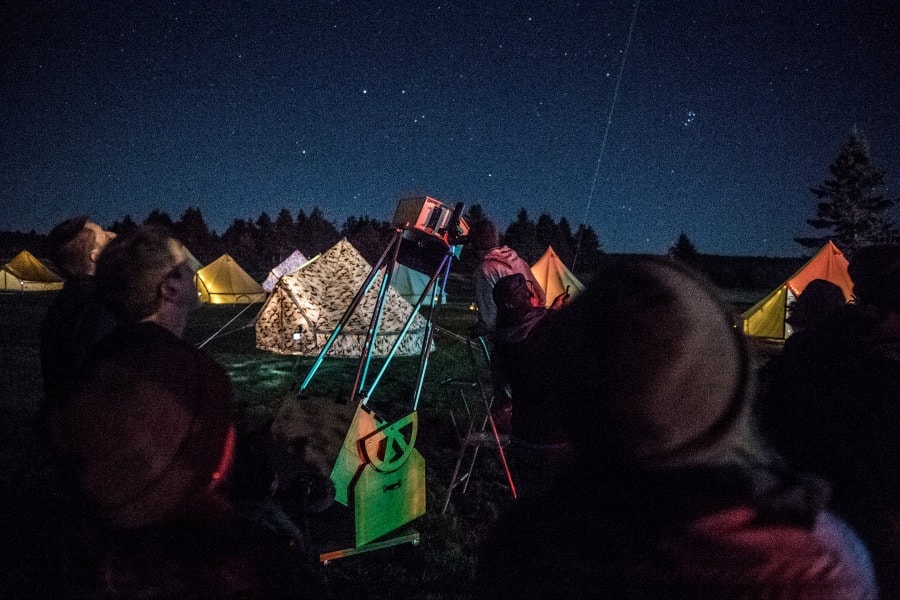 A Lesson in Astronomy

Back around the campfires, the field was covered by so many stars it looked as if somebody had poked tar paper with a needle. And we were in luck, as the director of the observatory at Mount Allison University had brought his giant homemade telescope. And a pointer, which truly helped me identify stars and systems. We were to have a lesson in astronomy. And I couldn’t have been more riveted. I was so attentive while learning about nebulas and asteroids, in fact, that I let my extremities get too cold. Some fire time and a great sleep prepared me for the breakfast that awaited when I woke. 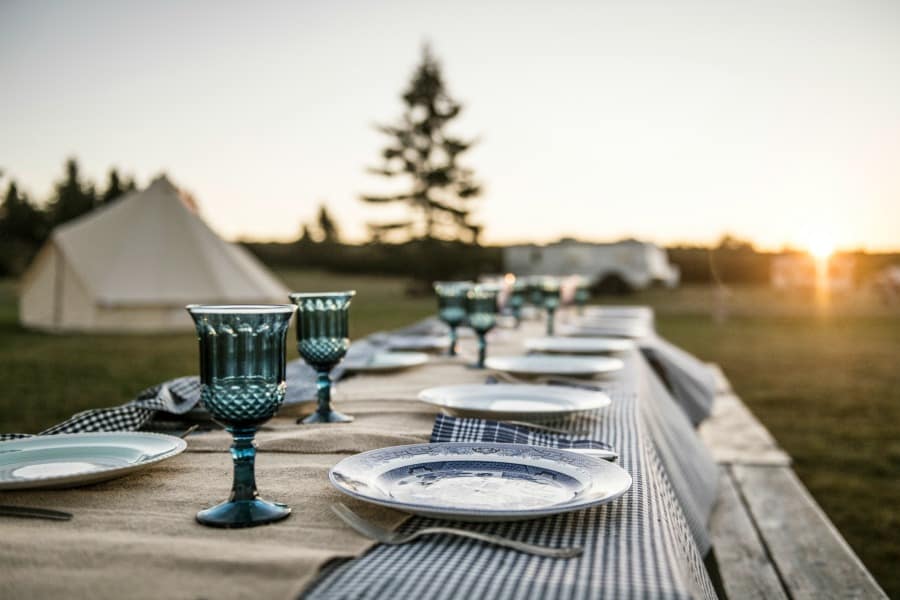 Only in Nova Scotia will you get two full blueberry pies for ‘breakfast dessert’ after finishing the bacon, eggs, sausages and pancakes. As a child I remembered making syrups of all types. If it were basically a fruit and you could add sugar, it was a perfectly acceptable topping for pancakes, waffles and french toast. Pie as well. I loved watching other journalists marvel at the wonders of traditional syrups! 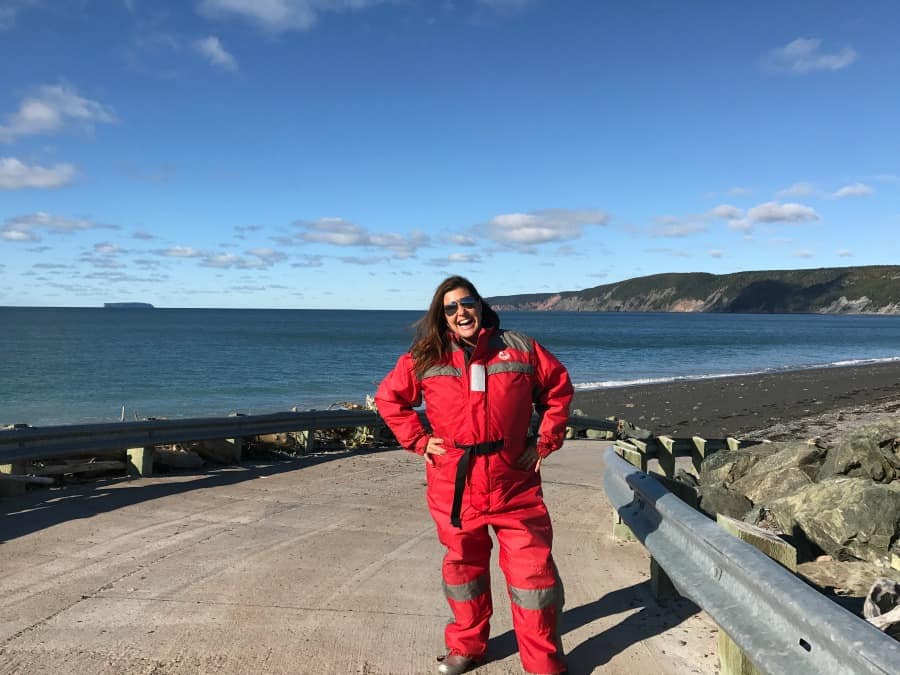 That’s when we went to get suited up for the boat ride with Darcy Snell of Advocate Boat Tours. The tides at Cape Split change up to 44 feet from high to low. While we were boating and the current was 7 knots! The 600-foot cliffs on the fault line at Chignecto Bluff appear in most geological textbooks. The collision of rhyolite and basalt and the now-vertical orientation proves we were attached to Morrocco once, before significant tectonic shifting broke the continents apart. One rock contrasted with another. 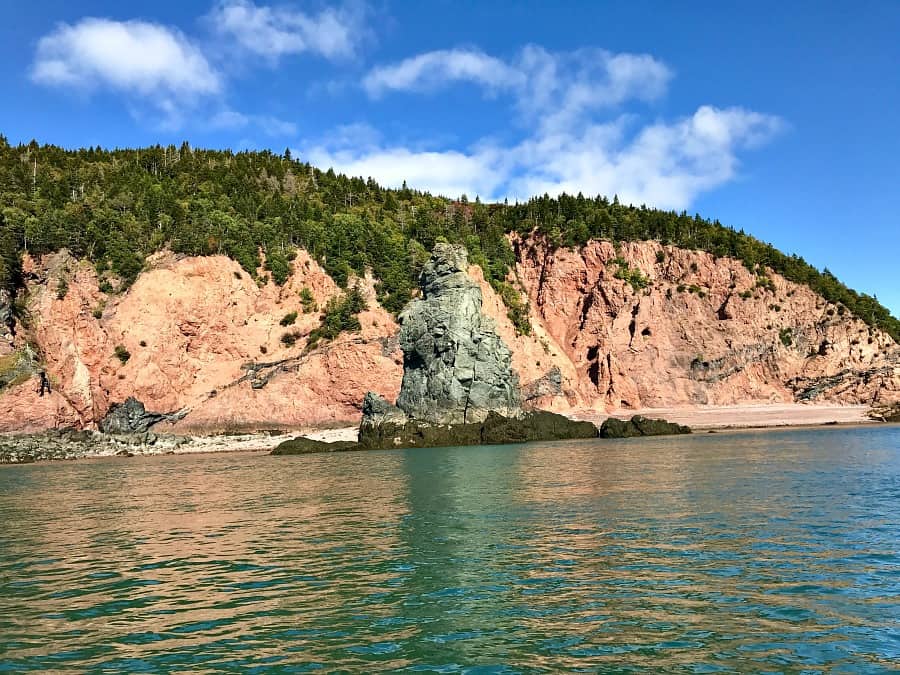 A beach called Refugee Cove was the site where Mi’kmaq sheltered fleeing Acadians for an entire year during the Expulsion of the Acadians in 1755. I just wanted to go ashore and try to find treasure in all of the caves. You will have to watch the full video to hear the Vogue photoshoot story that includes Pierce Brosnan’s son. Bet you’ll want to hear that! (video below). 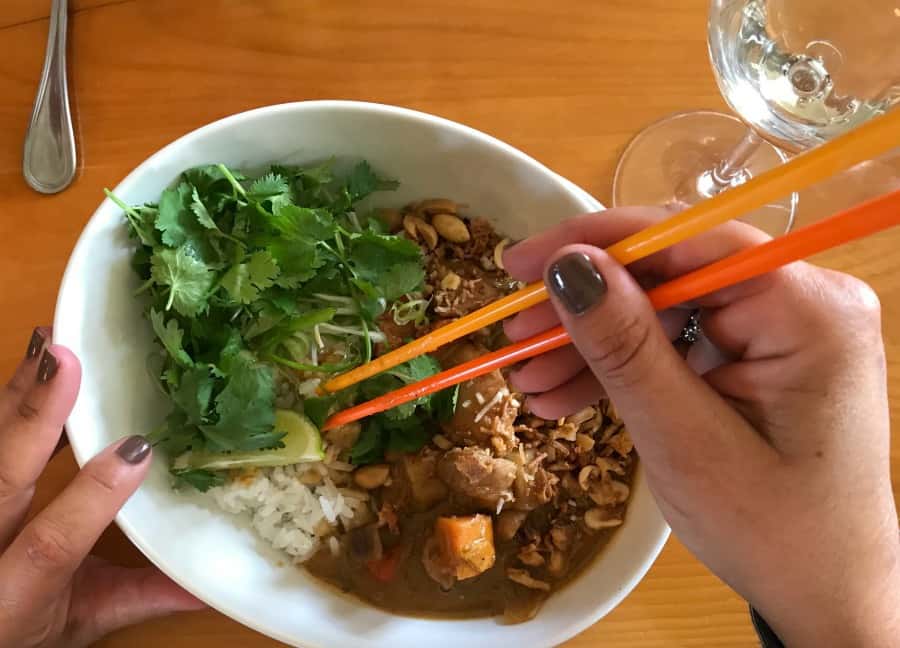 Fusing Past and Present

Our final lunch at Wild Caraway in Advocate Harbour struck me once again that my beloved Nova Scotia was progressing so fast. A decadent curry served with bright orange chopsticks (of varying shades) in a tiny town at the end of the busy tourist season summed up the past two days. I experienced so many juxtopositions. Million year-old fossils beside a world-class modern museum. Intricate leather stitching in a vehicle I was comfortable driving inside wearing a huge red puffy suit. Looking at stars millions of lightyears away while I used wifi in a modern vehicle to send messages to my family.

I marvel that there is so much corporate creativity and responsibility consistently practised by Chevrolet. The passion to showcase vehicles in undiscovered destinations in order to prove their versatility is one thing. But I also appreciate that they actively search for small communities that can benefit from added media exposure. One trip like this filled with travel and lifestyle journalists can bring notoriety to a tiny community so rich with history and hospitality. Well, Vogue always helps a bit too.

Chevrolet recognizes that the best way to discover a vehicle is to drive it like you would with your family. Beach. Moose. Boating. Gourmet meals. Sunset. Stargazing. Glamping. Ok, well maybe I wouldn’t pack all of those into one outing, but still! Particularly during the year of Canada’s 150th birthday, I am honoured to have been included in an experience that showed me more of my country. And also showed me more of the part of Canada I grew up a few hours away from but never took the time to experience before. Shame on me. Maybe I just didn’t have the right vehicle.

Disclosure: I was hosted on a media trip to explore the 2018 Traverse by Chevrolet. All opinions and thoughts are my own. 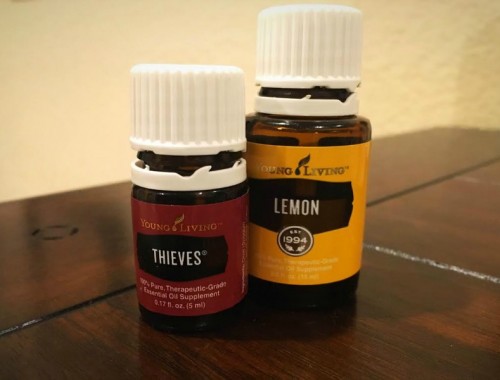 Clean Your Shower Doors In Minutes with Essential Oils 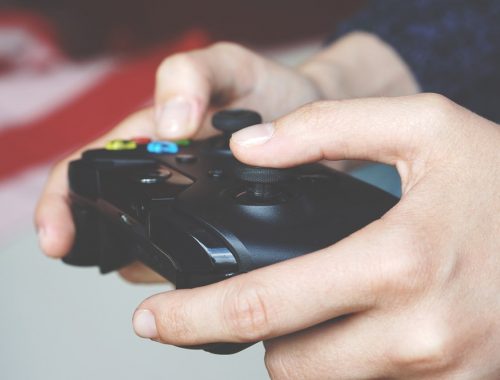 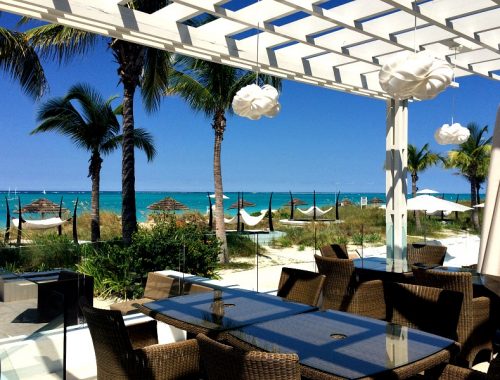