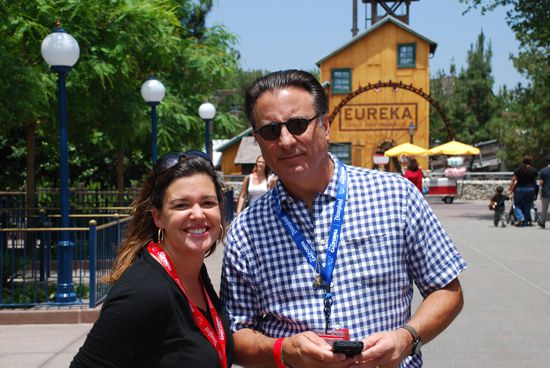 We’ve all been there (if we’re lucky) – the lineup for the Dumbo ride, the first time on Space Mountain, or the Mickey Photo.  Rich or poor, young or old, Disney is the great equalizer – our smiles reflect happiness and our memories last forever.  And it’s not only at the parks that our spirits are moved.  Little Mermaid in a theatre.  Toy Story characters creating a stir at FAO Schwartz.  My personal memories (and pinnacles of my childhood) include Sunday nights watching the Magic of Disney, the Mickey Mouse Club and my first film in an actual theatre – The Muppet Movie. 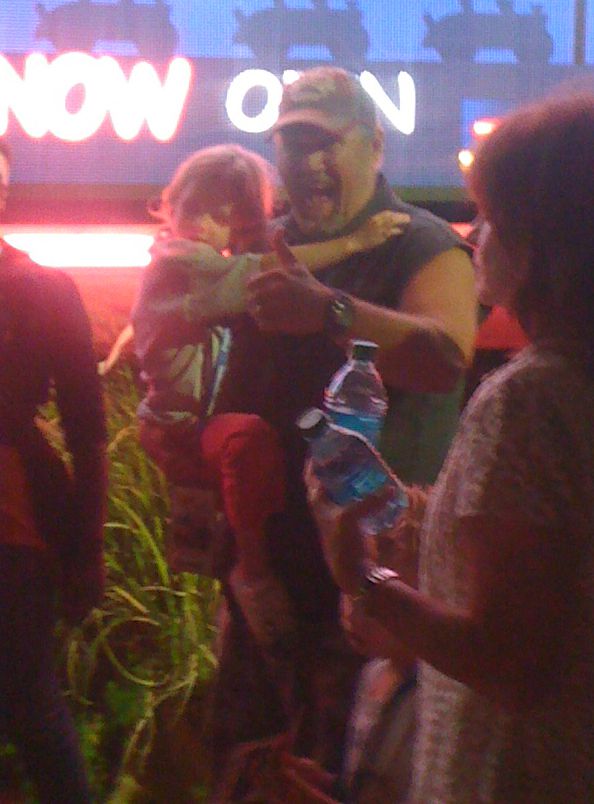 I have been fortunate to travel to Disneyland and Disneyworld over the past few months, and have been struck by the affinity to the Disney experience by such a diversity of people, including celebrities.  From Katie Couric and Kelly Ripa who wished the Disney Social Media Moms well and asked us to say hi to “the man (mouse)’, to Andy Garcia, Larry the Cable Guy, Zendaya, John Ratzenberger, John Lasseter and Edie McLurg, on the red carpet for the opening of Cars Land at the re-vamped California Adventure Theme Park, here are a few of my favourite celebrity photos from the past months.  Featured above is Andy Garcia and I, after a particularly ‘great’ parenting moment.  (I decided to ignore my toddler’s 12th temper tantrum of the day.  I kept watch, glancing back as I walked and he pounded his fists on the pavement in front of Ariel’s Grotto.  Who came to assist the flailing 4 year-old other than Andy Garcia.  Oops.)

Larry the Cable Guy was the voice of Tow Mater and is quite obviously amazing with the bambinos.  I just wish I could have seen him riding Mater’s Junkyard Jamboree.  We giggled incessantly.  It was a gas!!

Kelly Ripa greeted the Disney Social Media Moms warmly via video and with a fondness for Disney that I will remember for years.  She has obviously been to the parks several times with her kids and wanted us to put in a good word.

Katie Couric wished the Social Media Moms well on video and talked of her love of Disney.  I was hoping that during the conference some of her reporting genius would sprinkle over me like the pixie dust. 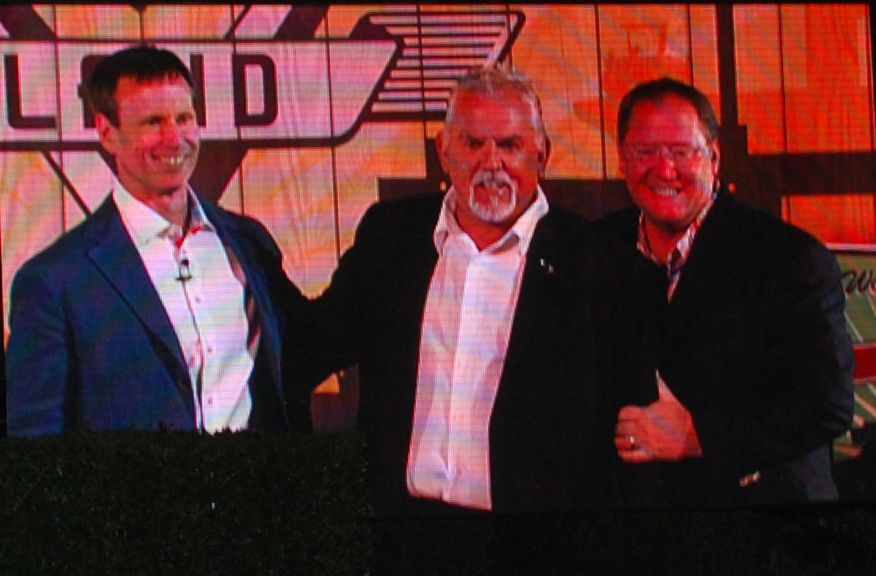 Tom Staggs, John Ratzenberger and John Lasseter at the opening ceremony to Cars Land on June 14, 2012.  Quite the triumvirate.  I had brunch with Mr. Staggs while on the Disney Fantasy cruise and must say that his excitement even a few months ago was infectious.  He talked of the attention to detail, the efforts to accommodate children and the desire to adhere to the original principals of Walt Disney in creating new attractions.  The Cars Land photos he showed us on his iPhone, however, were nothing like seeing Radiator Springs in real life.  (Sorry Tom). 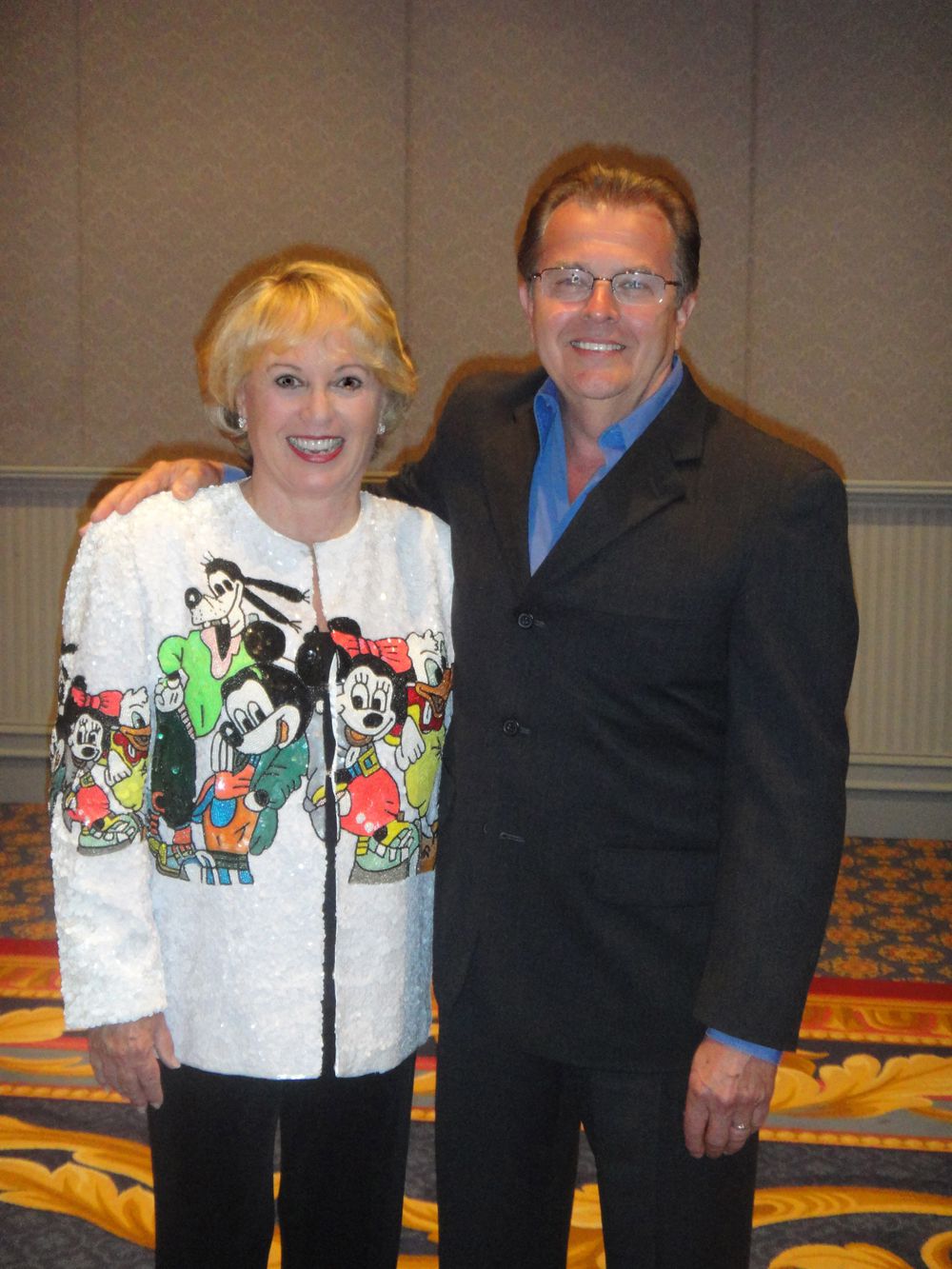 Mouseketeers Cubby O’Brien and Sherry Alberoni when I met them at the Disney Social Media Celebration.  As original members of the Mickey Mouse Club, Cubby and Sherry shared memories of Walt, magical moments and showed us footage that I remember watching as a child.  I had the pleasure of meeting them in person after their presentation and could hardly refrain from a tapdance.

Edie McLurg (who my husband loves especially from her small role in Planes, Trains and Automobiles), played the voice of Minny in Cars and Flora in A Bug’s Life.  She graciously took time out from ‘Cars’ souvenir shopping to allow us a quick photo.  Melissa Vroon, Ann-Marie Templeman-Kluit and I were thrilled. 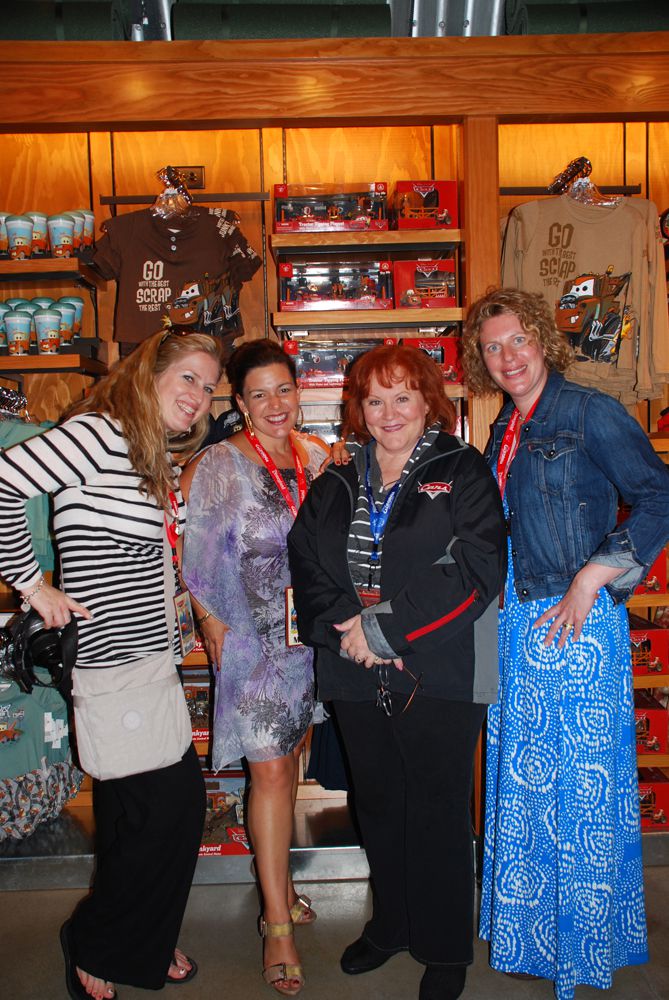 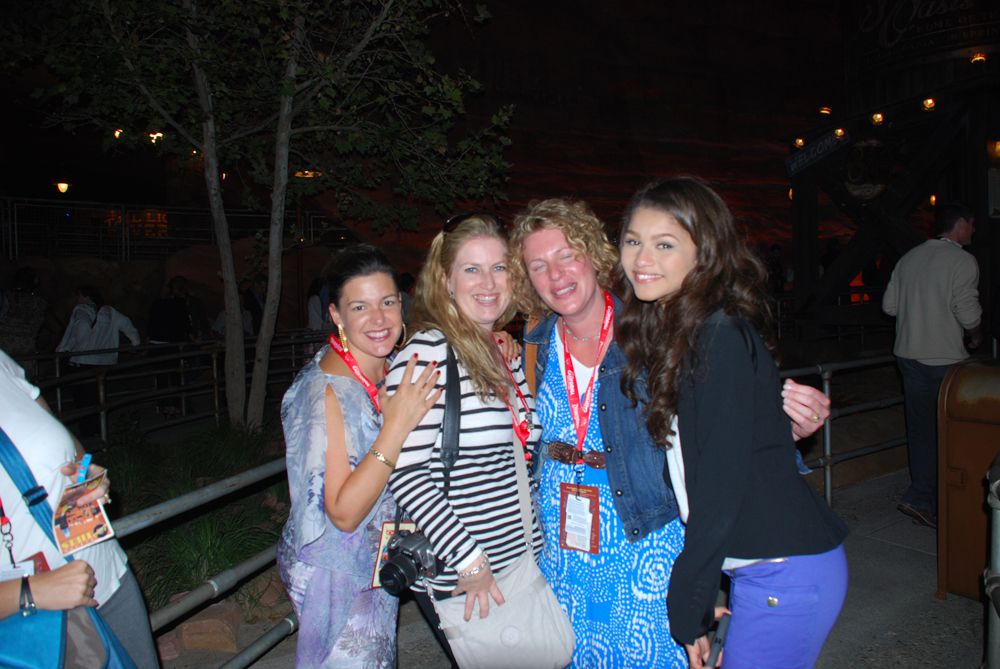 Zendaya Coleman, known mononymously as Zendaya, is an American triple threat.  Kind of like me, but a bit more successful.  (grin).  She currently stars on the Disney Channel sitcom Shake It Up as Raquel “Rocky” Blue.  I give her props for waiting in line with all of the normal people for over an hour to ride the Radiator Springs Racers, smiling the entire time. 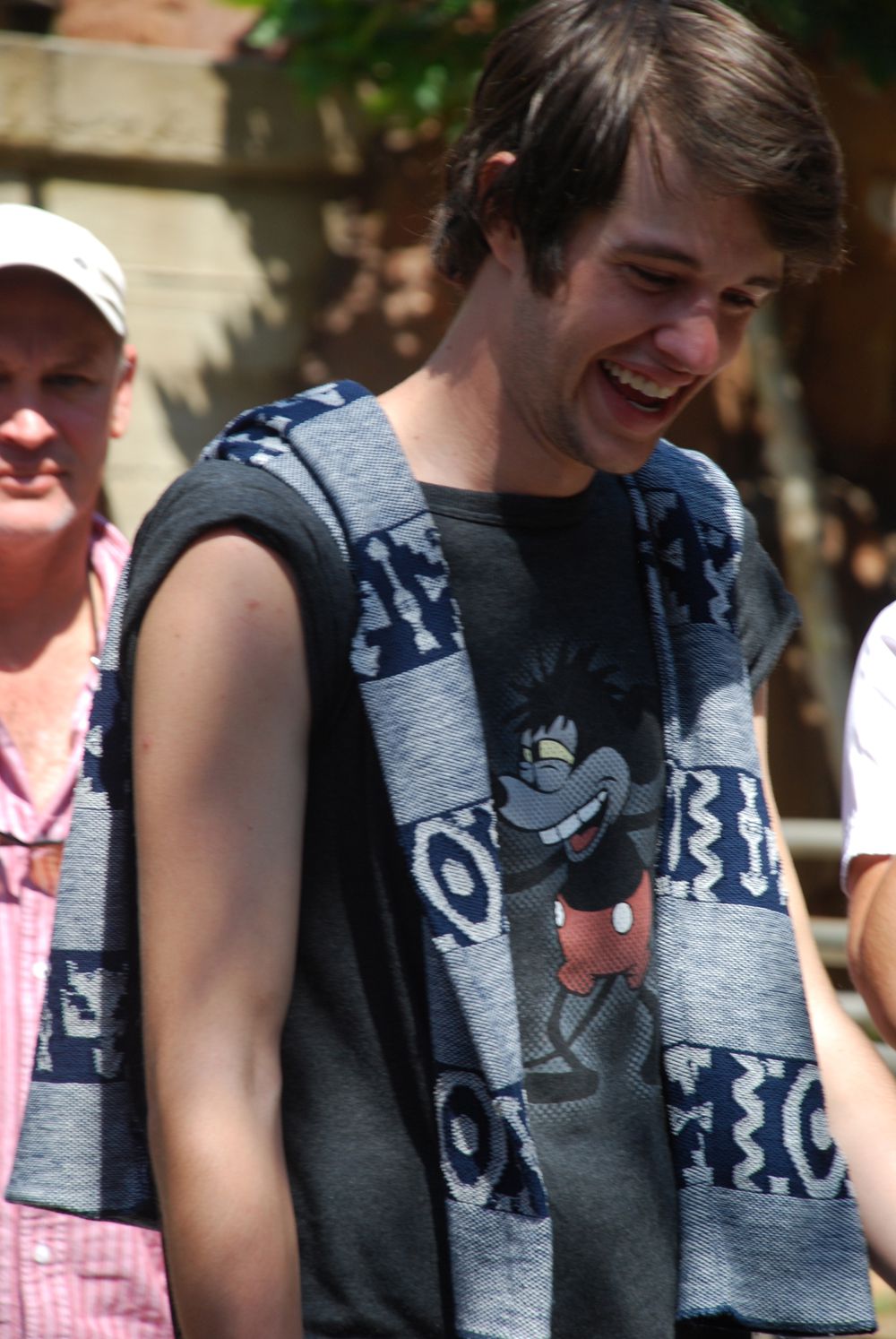 Matt Prokop is an American actor, known for his role as Jimmie “The Rocket” Zara in High School Musical 3: Senior Year and starred the Disney Channel Original Movie, “Geek Charming”, as Josh Rosen.  Here he is about to board the Radiator Springs Racers.  (An absolutely incredible ride!). 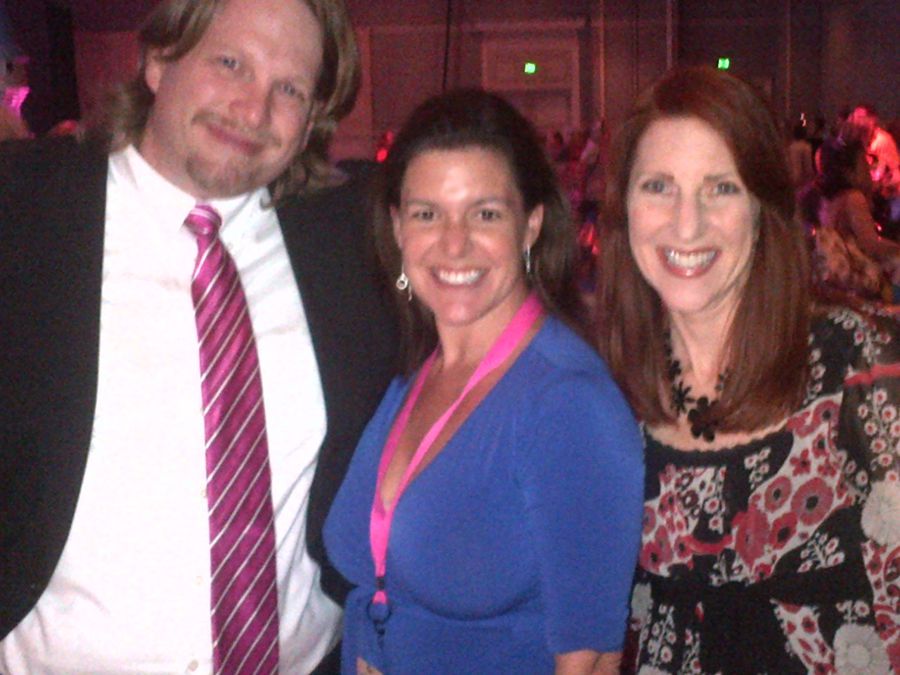 So what is it about Disney, how Disney attracts celebrity, that we all identify with? (celebrities or not).  I will go into this further in a future article, but for now I will put forth the notion of allowing magic into everyday life.  Creating memories.  Laughter.  Icons.  Heroes.  Stories that we all identify with.  And feeling close to our families while we experience it all pretty much takes the cake. 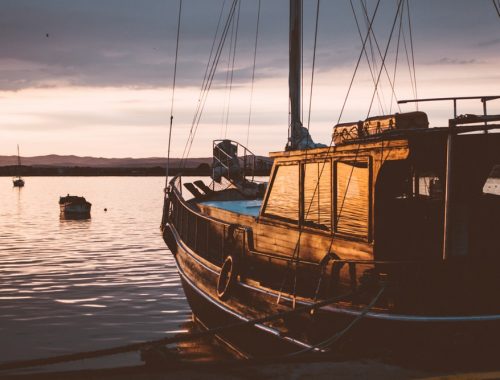