How to introduce your kids to dogs while outside

It’s a great time to put our kids in cute wool sweaters and take them out to the city park or the woods for a tromp in the leaves.  Well, the good and bad news is that you’re not alone in your thinking.  At a variety of parks, woods, and beaches you’ll find a lot of people out walking their dogs –– which, for a new parent, or parents of babies and young children without dogs, can be a source of some anxiety.  So how do you introduce your kids to dogs while outside?

First things first: of course it’s reasonable for the parents of a child who do not have a dog in their own home to be nervous about their child encountering a new dog. And size and breed don’t necessarily matter here as a bouncy new Labradoodle pup can just as easily knock over a one-year-old as can a 10-year-old mastiff.  So how do you know when to be concerned, and what you as a parent should look for when Fido comes bounding out from between the trees?

With these questions in mind here are your doggie ABC’s.

What is the dog looking at? Is he chasing a ball? Playing with other dogs? Is your child just another bright spot in a field of interesting, fragrant things?  Or is the dog focused solely and intently on your two-year old and his strawberry ice cream cone?  If either of the first three there’s probably no need to be anxious at all.  If the latter go to B.

Take a few seconds to look at the oncoming dog’s body language.  Is the puppy or dog that’s bounding in your direction wagging his or her tail? Does the dog have its head up? If the dog’s head isn’t raised is the dog sniffing along the ground with their tail up? Does the dog look generally relaxed?   If not, does the dog have its head down below its shoulders and its tail low or tucked? Are its ears back? Is there a ridge of raised fur (hackles) along its back?  If the dog’s body language is positive the worst thing that will probably happen if the dog comes up to you is that your child may get a wet kiss or a playful nudge – especially if the fur-ball in question is a puppy or younger dog, or a dog from a home with kids where playing with children is par for the course. Children generally like dogs so a bit of a dog bump or kiss won’t hurt the average toddler or child (although no one likes paw prints on their Sunday best).

If you think the dog has negative body language, be prepared to stand between your child and the dog (which, in most cases is better than lifting the child up as dogs tend to be more interested in what’s visible and as, from a dog’s perspective, scooping your child up not only signals that perhaps the child is something the dog should be interested in, but it also signals vulnerability on the part of the child).  All that said, before taking any defensive action, consider C.

Does the dog, whether on-leash or off, appear to be under control? For example, when their owner (if visually present) uses vocal, hand, or other auditor signals (like whistling) does the dog respond? If yes, then calmly standing between your child and the dog so you can ‘meet’ the dog first is fine. If no, move the child behind you and prepare to be firm with the approaching dog by saying ‘no’ or ‘off’ in a low firm (intimidating) voice, or by using your knee to block it if it jumps toward you.

Remember, the chances of urbanites in public parks and woods meeting a genuinely aggressive dog are quite slim. It’s far more likely you’re just going to run into a dog who has been in the house too long and who is now running through the woods internally yelling ‘Whooooo hooooo, look at me!’ Still, being aware of what to look for can make you more relaxed and can help instill a positive feeling for dogs in your young child.

Only one out of every twenty children who approach my dogs (I’m an urban-dog-mum) do so the ‘right’ way. Just as there are protocols in meeting fellow humans (generally we make eye contact, exchange a verbal greeting, touch in a way that is appropriate whether nodding, shaking hands, hugging or kissing) there is a way to meet a dog that makes the dog feel comfortable and safe in their space.

First of all, with a strange dog, ask if the dog is friendly or ask the dog’s handler if you or your child may pet the dog. (Some dogs have been horribly abused and can be shy in certain circumstances or nervous about certain genders, ages, objects, quick movements etc.).

Related: What to expect from your dog when you’re expecting

If the answer is yes, or if the unattended dog (tied perhaps outside of a shop) is giving you a strong indication it would looove to be pet, have your child do the following:

(Note: if you’re a bit apprehensive, do this yourself first, but still ensure that even if Mr-Wags-Lick-A-Lot is the nicest dog on the planet that your child follows the same protocol after you).

2. Then with your fingers curled lightly under your palm slowly move your hand, knuckles forward, towards the dog — ALWAYS at a level that is LOWER than their head. Remember: dogs are very visual and highly-sensate animals and being touched by something that drops down from above makes sensitive dogs nervous and can startle even a calm dog. (Plus it’s a bit like the human equivalent of walking up behind someone and slapping their back before they see you.)

3. Then let the dog greet the hand. He or she may want to smell the hand first or lick it, but either way your child has done the polite thing by introducing him or herself to the dog which means that whatever kind of pets or kisses follow, the interaction has been mutually agreed on.

4. Always end by saying “Good dog!”  This reinforces the dog’s sense of the exchange (Hey! That was good, I like kids!) and it’s also plain old-fashioned nice.

And remember whether dogs are a part of your child’s life in the home or whether they’re something you happen upon while hiking the trail, dogs, like kids, are capable of a lot of love and joy. But, like babies and toddlers, some of them are just learning what’s what: that leaves are to be tromped through, that ice cream is better on the cone, that the sun on your back feels good, and that the world can be full of wonderful new friends. 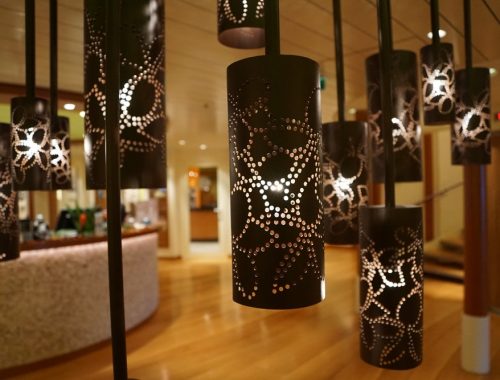 Treat Yourself With A Day At The Miraj Hammam

Watching the News with Kids When There’s a World Crisis