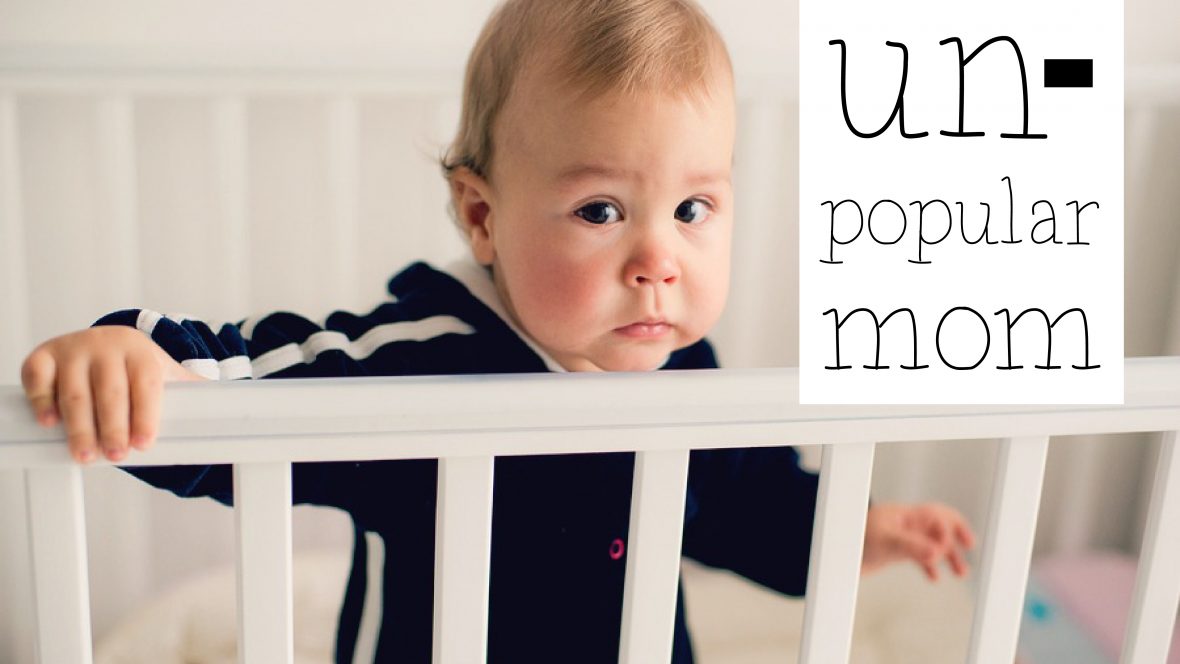 Cry It Out, Baby: How Sleep Training Saved My Sanity

It’s true. On the surface, I do look very much like your typical crunchy-granola attachment parent. I breastfeed, make my own baby food, buy organic, wear the babies, redirect rather than punish (or try, at least), and even do a little bed sharing. Letting my baby cry it out would be the last thing a mom like me would do.

You might assume I’d be one of those moms who pops up in your Facebook newsfeed, all sanctimommy in my choice of shares, doling out judgment and unsolicited advice—but you’d be wrong. You won’t find me mom-shaming anywhere. My philosophy is ‘we’re all in this together.’ And try as I might, living with my headstrong 3 ½ year old daughter leads to considerably more yelling and empty threats than I ever thought would be in my mommy wheelhouse.

Below the surface, I’m pouring myself into motherhood and it’s draining. About two hours before bedtime, I start watching the clock, waiting for my husband to come home from work and relieve me from being “on” all day. I’m touched out and ready to have tiny hands tucked into bed, where they’ll hopefully stay until morning. I start to snap and say things like, “Stop touching my legs! I’m not a jungle gym!” What I’m saying right now is what we all know: motherhood is complicated. There’s what I think I should be doing; what I think other people think I should be doing; and what actually happens. I go with my gut for most decisions because it’s true that there’s an unseen bond between parent and child and you just KNOW THINGS. But sometimes I scour the internet looking for answers to an issue we can’t overcome.

One such issue has been how to get my baby son to sleep and then, how to keep him asleep. We won the sleep lottery with my daughter. We had to wake her for nighttime nursing sessions when she was a baby because she didn’t weigh enough to go all night without a feeding, but would sleep all night if we let her. That’s right. We set an alarm. To wake a baby. It’s as crazy as it sounds. But by six months she was sleeping eleven hours straight at night and taking two really good naps during the day. It was heavenly. I’m not exaggerating when I say we were legitimately afraid of how our second baby would sleep. Surely we couldn’t be as lucky the second time around, could we? We weren’t.

Our son is a crappy sleeper. He naps on me during the day because that’s the only way to ensure good daytime sleep. He’ll fall asleep easily at bedtime while nursing, but wake up the minute I lay him in his crib. I’ll rub his back for 30 minutes once he’s in his crib, but it’s as if the back rubs wind him up, making him more and more annoyed that he’s not asleep, that I’m not holding him, that something is not right in his world and mommy can’t figure it out. He wakes up throughout the night, as well. His personal best was every forty-five minutes. And the only person who can attempt to help him sleep is me. My husband cannot help. My son won’t allow it. Only mommy will do.

When my son was eight months old I reached a breaking point. I was sleep deprived and felt like I was beginning to resent him for stealing sleep and downtime from me. The video monitor that we bought because we thought it would be cool to watch our little bundle snooze had to be in kitchen away from the family room where my husband and I attempted to relax in the evening. Having the monitor in my sightline made me anxious because if I could see my son move in his crib, I assumed it was only a matter of time before I’d have to trudge back upstairs to nurse him, rub his back, or pace the floor humming lullabies while he squirmed and cried in my arms, eventually just giving in to exhaustion. This sometimes took hours.

I told anyone who would listen that my baby boy was a terrible sleeper. Most commiserated, but it didn’t put me in a better place. It became an antagonistic mantra “Babies don’t like sleep, but babies need sleep.” The deduction: Babies have terrible reasoning skills. As much as I complained, though, I didn’t have a plan about how we could get more sleep and have time apart (which I was realizing I desperately needed). But slowly, very slowly, I was warming to the idea of cutting the cord, going cold turkey, and letting him cry it out. I read articles and searched forums about the cry-it-out method. I was in uncharted waters and sinking fast and needed a lifeline. I didn’t know what else to do. All I knew is that I needed sleep and some time to myself.

I mentioned to someone new that my baby was a terrible sleeper and that we were thinking of just letting him cry it out because nothing else was working. I expected her to be magnanimous. Her kids are grown, but how can you forget the sleepless nights? I thought. Surely she’d tell me what I needed to hear: “It’s going to get better. I know it’s hard. You have to do what you have to do to make you and baby happy.” More importantly I wanted her to say, “You need downtime and you need to sleep,” as if I was asking permission to let my baby cry. Instead she told me: “Just enjoy him. He’s only going to be this little once. I never let my babies cry. It’s just not right.” I felt like I’d been slapped in the face. My tired eyes stared at her, shooting daggers and trying to figure out how to respond. How could she? I knew that crying it out wasn’t the most gentle way to get my baby to sleep, but desperate times were calling, and (doesn’t everyone know this?) when a mom is in a desperate place, the last thing she needs is your judgment.

I reeled for a while over that interaction, uncertain how to proceed. Then, one night after tw0 hours of trying to get my son back to go down at bedtime, I had to walk away. I wasn’t helping him. He was mad about not being asleep, and I was in the same boat. He was eight months, I reasoned; he was old enough to at least attempt to go to sleep on his own. I placed him in his crib and said what I say to both kids every night at bedtime: “Good night. I love you. Sleep well. Have good dreams. I’ll see you in the morning.” I rubbed his back and said good night one more time. He didn’t move, probably unsure about what was happening. He remained quiet as I walked to the door, but began to cry as I left the room.

Leaving him crying wasn’t as hard as I thought it was going to be. In fact, it felt a little freeing. I calmly walked downstairs and watched him on the monitor, not feeling the anxiety this baby gadget used to evoke. He cried for forty-five minutes and then lay down and went to sleep. I watched him on the monitor for hours, before falling asleep myself. And he slept through the night—eleven consecutive hours. It was heavenly.

It hasn’t been all sunshine and roses as we work through my son’s sleep-training, but I’ve learned a lot during the process. For instance, I learned that when I can count on my baby sleeping, I actually miss him and look forward to seeing him again. The resentment over stolen time is gone. Also, I’m no fool now. I know there’s a difference between a sad cry and a mad cry. On the nights when he does cry, he’s mad. He’s mad because he’s not asleep and he wants me to help him because putting yourself to sleep isn’t easy (picture yourself lying in bed at night, but without the understanding that you’ll eventually drop off.) And you know what else? No matter how much he cries while going to sleep (which happens more and more rarely these days), in the morning when he wakes up, he greets me with a huge smile when I go into his room. I give him a huge smile, too, because I’m proud of him for getting the sleep he needs and because I truly missed him and am so happy to see him again. We hug and cuddle—reunited and it feels so good. He nurses and is then ready for breakfast shortly after. His eating has improved, too, because his schedule is more concrete and regulated around waking hours—he knows what to expect.

Ultimately, the bottom line is that this route was 100% necessary for both of us. I’m a much better mom when I get time away from my children to recharge my battery and do something not directly mom related, even if it’s writing about being a mom. I want to be there all the time, but when I actually do that, I can’t help but pull away because I need my own time to be complete. Knowing that my baby can go to sleep on his own and knowing that I can count on downtime and sleep makes me more present, not a “perfect mommy,” but a mommy who can stand to be a jungle gym for a little bit longer.

Moving a Toddler from a Crib to a Bed